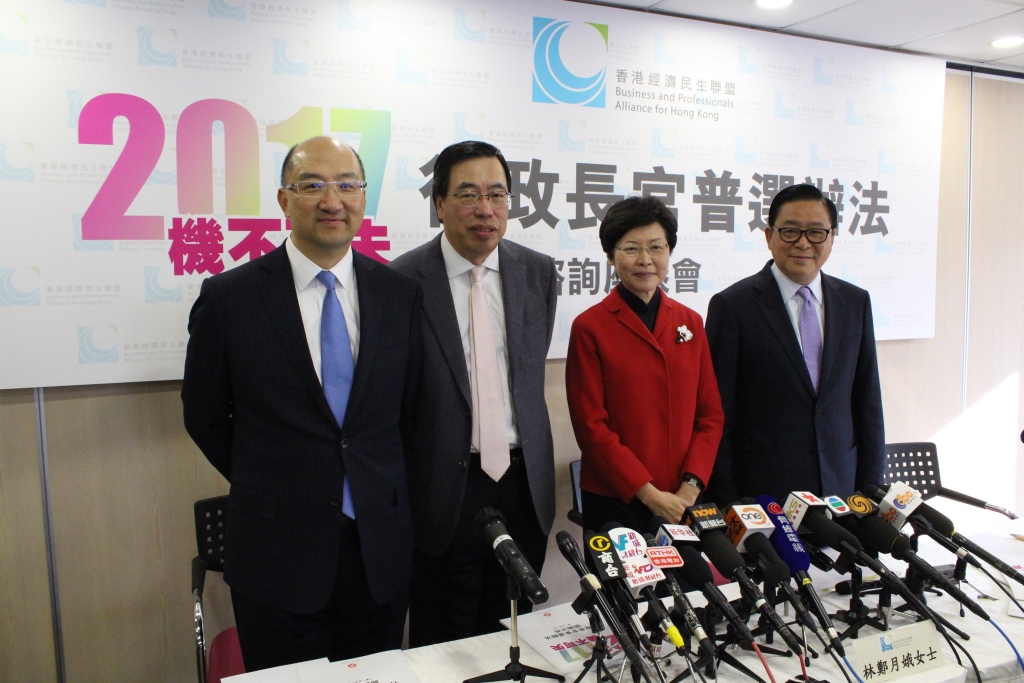 The Business and Professionals Alliance for Hong Kong (BPA) today (January 1) invited Mrs Carrie Lam Cheng Yuet-ngor, Chief Secretary for Administration, and Mr Raymond Tam Chi-yuen, Secretary for Constitutional and Mainland Affairs, to attend the BPA’s 2nd Symposium on Political Reform. During the discussion, participants encouraged the government to continue its fight to secure votes from the pan-democrats. There were also calls for all parties to focus the discussion on detailed arrangements for implementing universal suffrage for electing the next Chief Executive (CE).

About 60 representatives across the BPA membership participated in the event. They included Legislative Councilors, District Councilors and representatives from the commercial, industrial and professional sectors. Pragmatic suggestions on political reform were exchanged with attending officials in the course of a frank and candid discussion.

After the symposium, Mrs Carrie Lam Cheng Yuet-ngor, Chief Secretary for Administration, said that there was overwhelming support from participants to the political reform package as provided under the framework of the Basic Law and the Decisions of the Standing Committee of the National People’s Congress (NPCSC) to introduce universal suffrage for the 2017 CE election. She said participants backed government’s all-out efforts to prevent constitutional development in Hong Kong from coming to a standstill by securing support from the 27 pan-democratic legislators.

She added that although the current situation did not appear too optimistic, the government would continue to strive for support within the timeframe available. She also looked to the BPA in lobbying the pan-democrats in the hopes of obtaining their endorsement to the reform package. 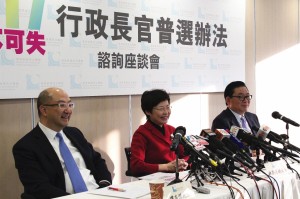 The officials were in good spirits as a result of participants’ encouragement.

Mr Jeffrey Lam Kin-fung, BPA Vice Chairman, pointed out that the NPCSC’s Decisions on August 31 carried profound and due weight. He also noted that opinions expressed at today’s symposium, as well as those from other public opinion polls have clearly shown that there was popular demand for electing the CE in 2017 through a system of “one person, one vote”. He added, “People do not want to be couch potatoes and watch television when voting is carried out. They want to be able to take part and vote.”

He acknowledged that consensus would not come easily but was nevertheless hopeful that people in Hong Kong would cherish the opportunity to engage in constructive discussion rather than being mired in meaningless arguments and unrealistic requests.

BPA Chairman Mr Andrew Leung Kwan-yuen said, “If we fail to achieve universal suffrage in 2017, Hong Kong’s economy and the livelihood of its people will be adversely affected. We therefore urge all parties to make a concerted effort for the sake of advancing constitutional development in Hong Kong. The BPA will continue to communicate with our members, as well as the public and will submit a proposal in due course.”

Mr Andrew Leung emphasized that the BPA agrees that there should be no change to the existing composition of the Nominating Committee (NC), namely, 4 sectors comprising 38 sub-sectors. However, the BPA suggests that the threshold for “Member Recommendation” be lowered to 100 while also imposing a ceiling on the same. This would enable more aspiring candidates to be rendered eligible during the “Member Recommendation” stage. However, candidates would have to obtain nominations from more than half of all NC members to be allowed to run for election as CE. The BPA agrees that an appropriate forum should be provided so that candidates seeking nominations are given equal opportunity to garner support by explaining their political platforms and visions. Such a forum would also have the advantage of promoting transparency with the election process. 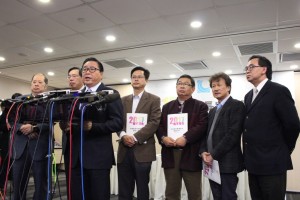 At a post-symposium meeting with the press, BPA members urged all parties to focus their energies on working out detailed arrangements to elect the next Chief Executive through universal suffrage.