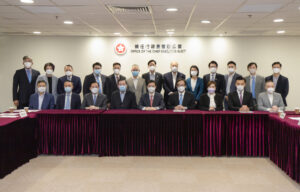 Chief Executive-elect John Lee met with core BPA members and Legislative Councillors close to BPA. They exchanged views on the work of the new-term government.

The core members of BPA met with the sixth-term Chief Executive-elect, Mr John Lee,  to exchange views on the work of the new-term government on May 16. BPA members put forward a series of suggestions and expectations, covering topics such as integration into the national development, economic and livelihood initiatives, and the development of youth etc. After the meeting, Chairman of BPA Dr Lo Wai Kwok said in a speech to the media that BPA hoped John Lee would lead the new-term government to be people-oriented, focusing on development and pursuing good governance. More importantly, the government should work hard on restoring normal customs clearance between Hong Kong and the Mainland or even foreign countries so as to speed up economic recovery after the epidemic. Dr Lo also revealed that John Lee had responded positively to some of the suggestions put forward by BPA by requesting more information in order to swiftly respond to public demands.

Dr Lo said BPA believed that economic development was the key in solving livelihood issues and deep-rooted conflicts in Hong Kong over a long period of time. There are two particular directions of governance urgently needed, first is to deal with the housing dilemma in Hong Kong in the short term. The government should find sufficient lands to build houses with a multi-pronged approach so the public could see hope in solving the problem. Second is to accelerate economic recovery after the epidemic. The government should resume normal customs clearance between Hong Kong and other places as soon as possible to restore the flow of people, reinvigorate Hong Kong’s economy and resolve deep-rooted conflicts through development. Dr Lo looked forward to the formation of the cabinet for the new-term government and hoped that the government could pursue good governance and lead Hong Kong out of the epidemic and reach a new peak.

Jeffrey Lam suggested the government to utilise the power of Hong Kong’s industrial and business community. Officials and the business community should work together to strengthen external publicity after the epidemic and tell Hong Kong’s story well. As such, the true image of Hong Kong can be shown and the international economic and trade status of Hong Kong can be rebuilt. As the third runway of the airport completed, the government should grasp the opportunity to suggest a co-location arrangement to the central government. It would harness synergy among airports in the Greater Bay Area and consolidate Hong Kong’s status as an international aviation hub, taking Hong Kong’s economy to the next level. He believed this would bring the citizens a sense of happiness and gain. In order to regain Hong Kong’s attractiveness as the Events Capital of Asia, Jeffrey Lam urged the government to make good use of the 500,000 air tickets purchased with an allocation of HK$2 billion from the Anti-epidemic Fund. The tickets should be distributed to tourists or exhibitors around the world so that businessmen will be attracted to visit Hong Kong and to stimulate consumption.

Dr Priscilla Leung suggested the government should consider investing in potential local start-ups business and making it easier for these companies to obtain bank financing. This would attract companies from the “Belt and Road Initiative” regions to list in Hong Kong and attracts talents to come. She pointed out that the government should reform the institutions and laws (for example, the Urban Renewal Authority Ordinance and Lands Resumption Ordinance) so as to be “result-oriented”in governance. The government should also encourage each bureau to set key performance indicators She hoped that John Lee could pay attention to regional voices and communicate more with young people in Hong Kong. She also hoped that John Lee could integrate people with different opinions and narrow the gap between the government and the public.

Jimmy Ng suggested the new-term government to coordinate better on releasing epidemic information so as to avoid public confusion and negative emotion affecting the business environment of Hong Kong. On the other hand, he also paid attention to the development of Hong Kong into a smart city. The idea was formulated 20 years ago, but it has not been promoted within the government. For example, there is no digitalisation in court documents and taxation work with a large amount of paper being used. He thus suggested the government to pursue digitalisation in order to keep up with the national and international trend of environmental protection.

Benson Luk hoped that the new-term government could work on enhancing young people’s upward mobility. Regarding housing policy for the youth, he suggested using idled community isolation facilities as youth hostels and allowing home starters to use their own MPF contribution for the down payment. The government should deepen young people’s knowledge about development of the Greater Bay Area in order to facilitate their integration into the national development. He also suggested the establishment of Commission on Youth, advocating that government officials should engage regularly with young people and listen to their opinions.

Sunny Tan, representing the Textiles and Garment sector, said Hong Kong’s traditional industries could work in complementing the National 14th Five-Year Plan to accelerate the use of technological elements in different industrial fields. He looked forward to streamlining procedures of taxation and government funding. In addition, he mentioned that the industrial and business community was willing to promote Hong Kong’s international role on economic and trade to the international community. He suggested explanatory work by the government with European and American political and business leaders would bring a more positive attitude towards Hong Kong and re-strengthen the economic and trade relations with Hong Kong based on mutual understanding.

Louis Loong, representing the Real Estate and Construction sector, said the government encouraged the industry to apply BIM digital plans, but the related department insisted on their submission in paper form. He suggested the government should rationalise the process, speed up the automation procedure of each department, shorten the time taken by departments on the approval of plans, and speed up the progress of housing construction. In terms of land development, he suggested the government to consider building houses in green-belt areas with lower ecological value, relax the threshold for compulsory auction on urban renewal projects and increase the plot ratio after reconstruction so as to increase land supply in the short term. As many large-scale projects were to be launched, he suggested the government should ensure sufficient manpower by attracting more young people to join the construction industry.