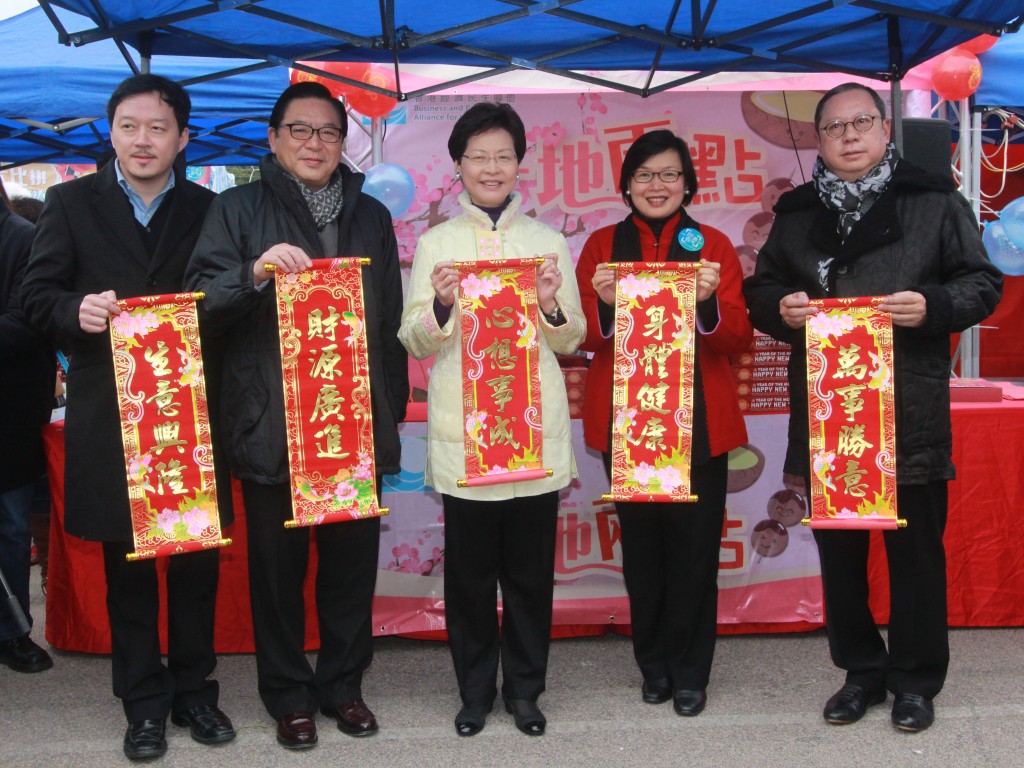 Mr Jeffrey Lam Kin-fung, BPA Vice Chairman, said that as monkeys were often regarded as being intelligent, energetic, agile and sharp-witted, he hoped that with the onset of the Year of the Monkey these qualities would be integrated into the Hong Kong spirit and harnessed for the benefit of the SAR’s competitiveness and prosperity. He also hoped for the infusion of more positive energy to offset negative elements that foster a sense of hostility and tension so that people in Hong Kong could live and work together in harmony. He wished everyone a successful and prosperous year!

In her speech, Mrs Carrie Lam said that this was the first time that she was officiating at the New Year Fair Stalls opening ceremony in her capacity as the Chief Secretary for Administration. She noted that the theme of “One Place, Two Points” as adopted by the BPA for its stall gave prominence to the two elements of the “economy” and “people’s livelihood”, which were also integral aspects of the BPA’s slogan, as well as a clever play on the characters that draw on the BPA’s Chinese name. She hoped that there would be collective efforts to focus on improving the economy and people’s livelihood. She also referred to predictions by Feng Shui practitioners that Hong Kong would encounter challenging times in the coming year. She gave assurances on the Government’s commitment to doing its utmost to improve people’s livelihood.

The opening ceremony was kicked off by a lively and vigorous Lion Dance that was aimed at spreading good fortune and prosperity. Officiating guests presided over the lion eye-dotting ceremony in a symbolic wish for peace and prosperity in Hong Kong. They then banged the gong once to wish for a “robust economy” and again to hope for “improvement in people’s livelihood”.

Dr Priscilla Leung said that as many residents in Kowloon West had expressed hopes for an early completion of the high speed rail, the Legislative Council should behave responsibly and refrain from filibustering immediately. She also extended her best wishes for good health and a thriving economy to the people of Hong Kong.

Ms Florence Hui demonstrated her calligraphy skills by writing a Fai Chun on the spot. In her message, she wished for a harmonious society focused on economic development and people’s livelihood that was underpinned by effective administration. Mrs Carrie Lam showed her support to the BPA by buying two boxes of “One Place, Two Points” cookies.

The name of the BPA’s stall, “One Place, Two Points”, was a reference to two of the most important concerns in Hong Kong, namely, economic growth and improvement of livelihood. These also featured highly on the BPA’s agenda, which we hope Hong Kong society shared as well.

“One Place, Two Points” also referred to one stall, two major activities, one of which concerned the sale of New Year cookies shaped like curry fishballs and egg tarts handmade by local youths. The other involved Fai Chun writing and the giving away of free New Year balloons. It is our hope that the stall would bring joy and happiness to the community during this festive period.