To celebrate the arrival of the Year of the Goat, the Business and Professionals Alliance for Hong Kong (BPA) today (March 14) held a Big Bowl (Poon Choi) Feast on the playground next to the Che Kung Temple. More than 2,000 revelers were able to enjoy a delicious meal along with the BPA’s best wishes for a bountiful New Year.

Mrs Carrie Lam Cheng Yuet-ngor, Chief Secretary for Administration; Mr Liu Lin, Director General of New Territories Sub-office of the Liaison Office of the Central People’s Government in the Hong Kong SAR(LOCPG HK); Ms Yang Xiao-chan, Deputy Director General of New Territories Sub-office of LOCPG HK; Mr Liu Guo-qiang, Deputy Director General of Kowloon Sub-office of the LOCPG; Dr Peter Lam Kin-ngok, BPA Council Chairman; Mr Andrew Leung Kwan-yuen, BPA Chairman; Mr Lau Wong-fat, BPA Honorary Chairman; Mr Jeffrey Lam Kin-fung, BPA Vice Chairman; Dr Lo Wai-kwok, BPA Vice Chairman; Dr Pricilla Leung Mei-fun, BPA Legislative Councilor; and Mr Kevin Ho Chi-ming, BPA CEO were on hand as officiating guests to preside over the kick-off ceremony for the Poon Choi Feast. As dancing lions entertained guests with their vibrant performances, which were accompanied by the din of firecrackers, participants began to dig into the Poon Choi Feast.
Mr Jeffrey Lam, BPA Vice Chairman, extended his wishes for prosperity to all and sundry, and harmony to all families for the New Year. He said he and Dr Peter Lam had walked the full distance to Sha Tin from Sheung Shui and along the way many people had shared with them their wish to elect the Chief Executive through universal suffrage in 2017. He said that the experience of being able to taste delicious food in person was completely different from that of watching a cooking programme on television. By the same token, the public is keen to cast their votes at polling stations instead of being passive audiences.

He said the BPA looked forward to the eventuality whereby all Hong Kong people could elect the Chief Executive themselves under the ‘one person, one vote’ arrangement. He also paid tribute to Mr Lau Wong-fat for his meticulous efforts in making available authentic cuisine from the New Territories.

In her speech, Mrs Carrie Lam Cheng Yuet-ngor said that the Poon Choi feast signified that other than a political party of the industrial, commercial and professional sectors, the BPA also had deep roots in the community. She wished the BPA great success in the 2015 District Council Election and in providing strong impetus to the future economic development of Hong Kong.

She said that the government would issue the findings for the Second Round Consultation on Political Reforms shortly and this would be followed by the submission of an amendment motion to Annex I of the Basic Law. Although the task of implementing universal suffrage for the 2017 Chief Executive election was an arduous one, she however drew great comfort and strength from the public’s support. She looked forward to the privilege of hosting the next feast, which she hoped would be held to celebrate the successful passage of the political reform package. 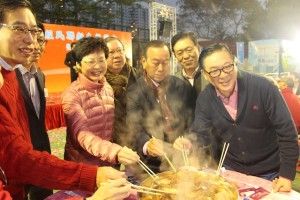 A hot and savoury Big Bowl epitomises the BPA’s care and concern for the community.

A Big Bowl Feast would be incomplete without any musical performance! Dr Lo Wai-kwok, BPA Vice Chairman, was on hand to share his musical prowess by playing on his saxophone. He gave a special performance of a popular Cantonese song, which he dedicated to Mrs Carrie Lam. He also exhorted the audience to overcome the many challenges associated with and to look forward to the fruits of achieving universal suffrage in 2017. He sang his heart out when performing another popular Cantonese song to cheer on the people of Hong Kong. Mr Ricky Sun Wai-kei, BPA District Development Officer, also showcased his vocal talents in entertaining the audience. It was under such a festive and joyful atmosphere that people enjoyed themselves thoroughly with the sumptuous meal.

Support from the team of volunteers has been indispensable to BPA’s success in serving the community. It was therefore opportune that the BPA capitalized on the Feast to publicly acknowledge the outstanding achievements by volunteers, commend their efforts in and contributions to community service, and encourage more volunteers to join.