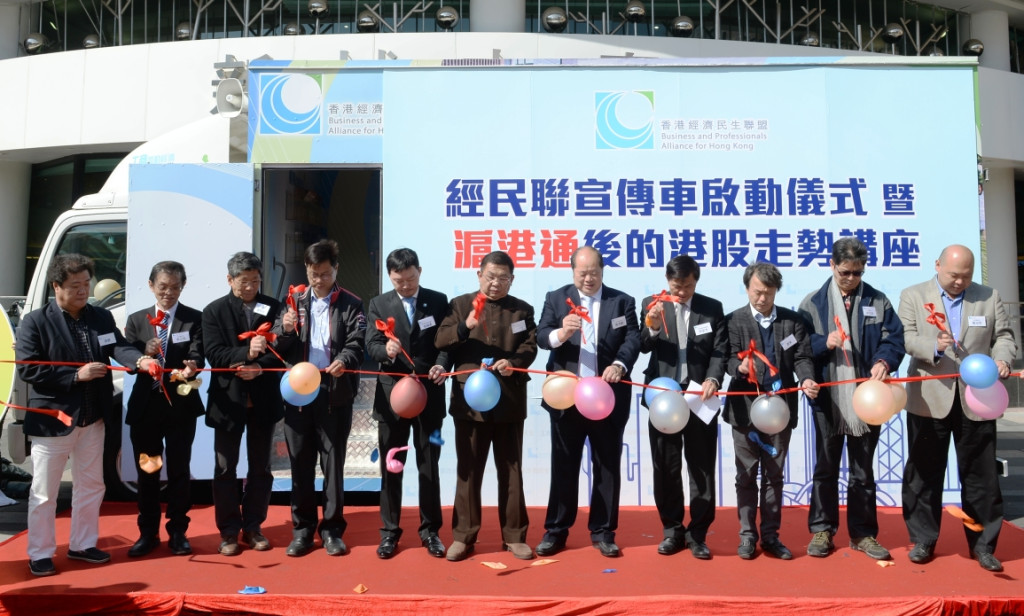 Since its establishment, the Business and Professionals Alliance for Hong Kong (BPA) has been practising its motto of “Business drives economy, professionalism improves livelihood” in providing citizens with professional community services. Today (December 16) marks the launch of the BPA mobile office and the delivery of the BPA’s first District Talk. On hand for the ribbon cutting ceremony were Mr Christopher Cheung Wah-fung, BPA Vice Chairman, Mr Thomas Cheung Tsun-yung, Convener of the BPA District Committee, Mr Simon Lam Ka Hang, Research Director of Christfund Securities, as well as BPA District Councilors. They were joined by over a hundred members of the general public in witnessing the official launch of the BPA mobile office.

In his ceremonial remarks, Mr Christopher Cheung said it was envisaged that the BPA mobile office would provide a more effective conduit to promote the BPA’s vision and services in the community, an example being today’s briefing by a renowned financial expert, Mr Simon Lam. The BPA will continue to provide administrative support and resources to aid its members in their efforts to serve the community better. This would, hopefully, have an incremental effect on improving livelihood and promoting social advancement in a professional manner.

Mr Thomas Cheung, Convener of the BPA District Committee, said the first mission of BPA mobile office was the “2015 Community New Year Wishing Tree”, which was intended to gather feedback from the public on enhancing community development and to provide a channel for feeding such views to the Legislative Council and the government.

Mr Man Chen-fai, BPA Tai Po District Councilor, added that District Councilors should “think out of the box” when exploring opportunities to improve their outreach to residents. As such, the BPA mobile office provides an ideal vehicle to liaise and build meaningful relationships with citizens. He also stressed that BPA District Councilors were more concerned about “getting the job done” than just “all talk and no action”.

During the BPA’s first District Talk, Mr Christopher Cheung and Mr Simon Lam not only shared their views regarding the impacts of the Shanghai-Hong Kong Stock Connect on the local stock market but also shared tips on investing as well.

Following its activation, the BPA mobile office will visit one district after the next to gather public comments and suggestions on developing the respective communities. It will also serve as a platform for volunteers from the business and professional sectors to contribute their expertise and knowledge, as well as for citizens to express their views to the BPA.