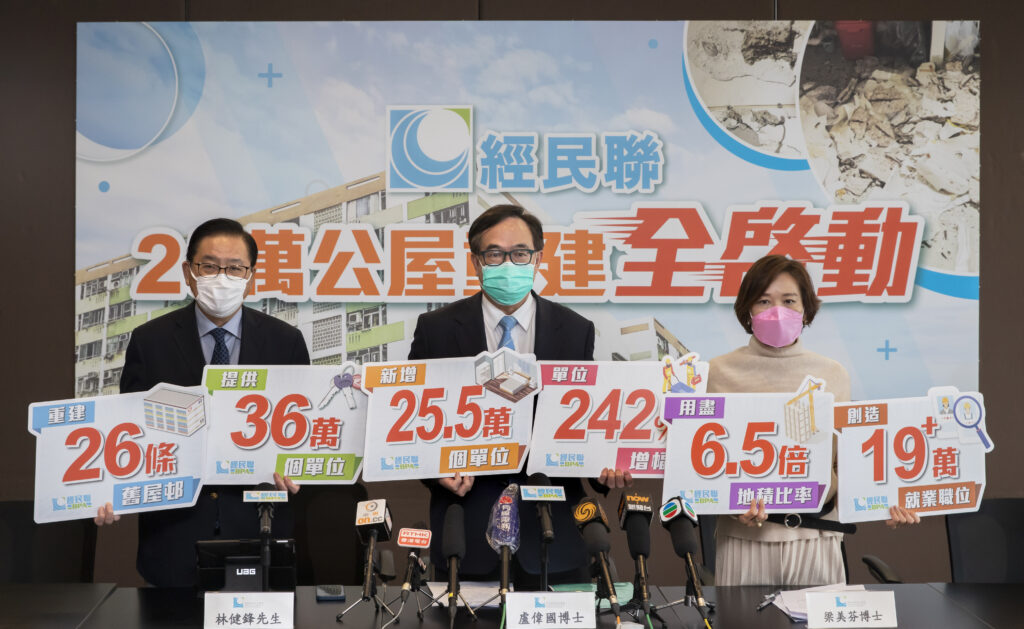 It was an old problem that Hong Kong citizens suffered from a long waiting time for PRH (public rental housing), and the average time had now extended to 5.6 years. At the same time, many older public rental housing estates were in deplorable conditions, even posing threats to the safety of residents. The Business and Professionals Alliance for Hong Kong (BPA) established a feature study and proposed a scheme, “Public Housing Redevelopment for Providing 250K Additional Units”, suggesting the government redevelop 26 older estates in Hong Kong. The Alliance expected a minimum of 255,000 additional public housing units would be built, in order to ease the shortage of supply and improve the residents’ living environment as well. The redevelopment scheme could also create 190,000 job opportunities and stimulate economic growth.

Ir Dr Hon Lo Wai Kwok, chairman of BPA, said the maximum domestic plot ratio for “Comprehensive Development Areas” was normally 6.5, therefore the redevelopment scheme was estimated to provide 360,000 public housing units, which was 255,000 more than the existing 105,000 units, an increase of 242%. According to the Housing Authority, there were around 260,000 applicants on the PRH waiting list as at 30 September 2020. “We think that the redevelopment scheme can more effectively shorten the waiting list,” Dr Lo said, “if there was a certain and stable supply of new flats from redevelopment, they would become the main source of new public housing to achieve the target provision of PRH and Green Form Subsidised Home Ownership Scheme (GSH) units in the Long Term Housing Strategy (LTHS).

Dr Lo said the redevelopment scheme was in no contradiction with the LTHS. As older public estates were to be demolished on one day or another, the authority must have a long-term view and a comprehensive plan for redevelopment as well as building new estates. Referring to the Comprehensive Redevelopment Programme, he said the 20-year large-scale public housing redevelopment project from the 1980s created at least 9,500 job opportunities annually on average and enabled the engineering sector and the construction industry to develop steadily.

Hon Jeffrey Lam Kin Fung, vice chairman of BPA, said the redevelopment scheme would provide a large-scale and steady supply and numerous employment opportunities, as well as tackling the safety and hygiene problems of older estates. The opinion poll conducted by BPA previously reflected that a large number of residents were happy to agree to the redevelopment. “Though the struggle will be bitter, its fruit will be sweet,” he said. He further stated that if we only relied on building new estates to fulfil the housing demand, we would not be able to meet the LTHS housing supply target and the waiting time for PRH would be longer and longer due to population growth. He urged the government to adopt a new mindset to review the public housing policy and make a good use of existing land resources, for example, by accepting the alliance’s suggestions.

Hon Priscilla Leung Mei Fun, vice chairwoman of BPA, said the authority must set a timetable and target on PRH redevelopment so as to give hope to the applicants on the PRH waiting list. She suggested same district allocation of flats as “local rehousing” maintained the residents’ social network and avoided the need to adjust to a new living environment. This could increase the residents’ recognition and gain their support for redevelopment in order to help the scheme proceed smoothly. The Housing Authority should strengthen cooperation with the Housing Association to launch strategic redevelopment projects in the same area and integrate the land resources owned by both parties for the joint promotion of redevelopment of these older estates.