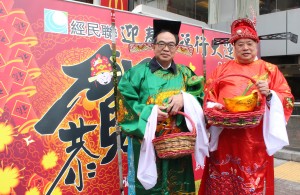 BPA Vice Chairmen, Mr Christopher Cheung Wah-fung and Dr Lo Wai-kwok, who were dressed up as Gods of Wealth of Prosperity, mingled with the public during the Chinese New Year festivities.

It has been become a tradition for the Business and Professionals Alliance for Hong Kong (BPA) to celebrate the third day of the Chinese Lunar New Year with the public. To welcome the Year of the Goat, BPA Vice Chairmen, Mr Christopher Cheung Wah-fung and Dr Lo Wai-kwok dressed up respectively as the “God of Wealth” and “God of Prosperity” when they paid a visit to the Mei Foo and Tai Po districts on February 21. Joining them on the BPA promotional truck were Mr Lo Sou-chour, BPA Tai Po District Council Member, Mr Ricky Sun Wai-kei, BPA District Development Officer and Mr Tony Chau Ping-him, BPA District Development Officer, who assisted the two “Heavenly Beings” in distributing lai-sees and New Year candies.

The visit of the “God of Wealth” and “God of Prosperity” created quite a stir! They were the centre of attention as numerous requests poured in from excited bystanders who were very keen to have their pictures taken with the pair for the sake of good luck. The “God of Prosperity”, Dr Lo helped pushed the affair to a climax by giving a live performance of popular Cantonese songs on his saxophone. Although not in Hong Kong, Dr Priscilla Leung Mei-fun, BPA Legislative Council Member, sent her festive greetings to the public and the media by phone.

The BPA wishes everyone happiness, good fortune, longevity and peace in the Year of the Goat!