BPA’s response to the 2015/2016 Budget: “Develop the Economy, Assist SMEs, and Give the Middle Class a pleasant surprise” 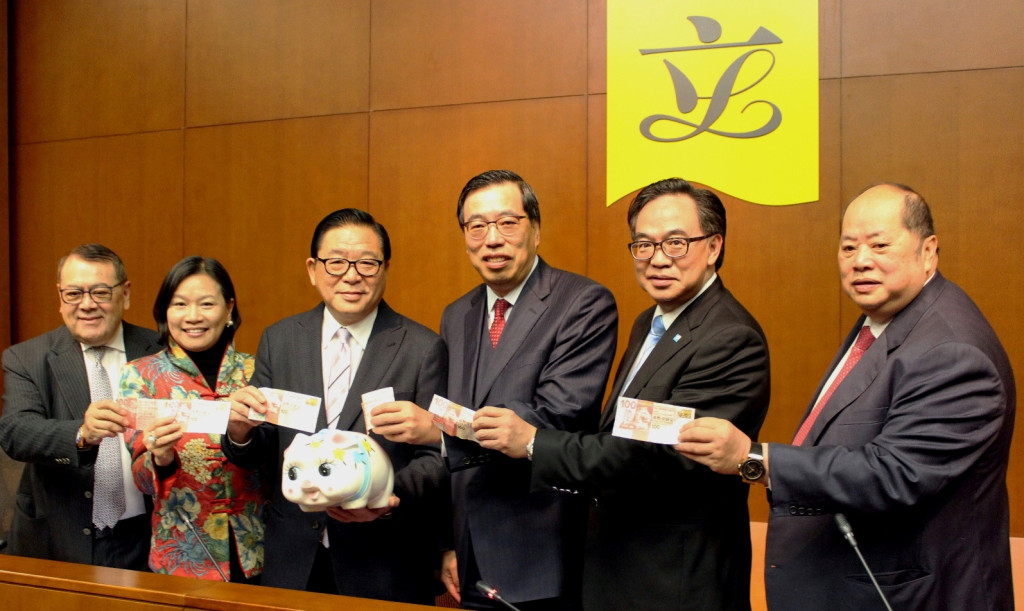 The BPA brought along a piggy bank to a meeting with the Financial Secretary to show its support for the Future Fund, which is intended to ‘save money for a rainy day’ and serve as a reserve for future challenges.

The Financial Secretary, Mr John Tsang Chun-wah, today (25 February) unveiled a whole raft of measures in his 2015-16 Budget, which is aimed at boosting economic development, and assisting small and medium enterprises (SMEs), middle class families, as well as the grassroots. The Business and Professionals Alliance for Hong Kong (BPA) welcomes the Budget, which it regards as being comprehensive, forward-looking and conducive to social stability. In his latest Budget, the Financial Secretary has also responded to the BPA’s proposals by incorporating a number of measures to address the needs of SMEs that have been adversely affected by the Occupy Movement.

The Budget includes a range of relief measures amounting to $34 billion, which together with other initiatives could bolster GDP by 1% and help restore confidence.

Apart from policies to consolidate support for traditional industries, this year’s Budget also includes initiatives to develop a diverse range of new industries, promote economic development, and enhance employment opportunities. Additional resources will be also allocated to promoting upward mobility opportunities for youths through, among other things, a sponsorship programme for overseas internship as had been proposed by the BPA, a $300 million matching fund to support local arts groups, the roll-out of a new phase of the Enhancing Self-Reliance Through District Partnership Programme with $150 million to encourage business participation, and a $500 million scheme to promote Hong Kong’s fashion designers and brands.

Other BPA proposals that have been accepted by the Financial Secretary in the Budget include a more accommodative environment for alfresco dining and the introduction of Food Trucks, a concept that is very popular overseas.

Caring for the Middle Class and Helping the Disadvantaged

Mr Andrew Leung Kwan-yuen, BPA Chairman, said the BPA has long called for relieving the burden on middle class families and continues to urge the Government to grow the ranks of middle class over the longer term given the importance of this segment of the population in the overall context of Hong Kong’s socioeconomic development. Mr Andrew Leung said that thanks to a healthy Budget surplus, the Government has adopted the BPA’s suggestion to increase the tax rebate ceiling by up to $20,000. By returning wealth to the people, this will also provide financial relief to middle class families. The Financial Secretary is also mindful of the needs of the disadvantaged and has proposed waiving one month’s rent for tenants living in public housing and to provide an extra two months’ allowance for those on such welfare programmes as Comprehensive Social Security Assistance (CSSA).

The Financial Secretary has adopted many of the BPA’s suggestions for government assistance to the five sectors, namely, the hotel, retail, catering, tourism and transportation trades, which have been the most affected by the Occupy Movement. This will be achieved through the waiving of license fees, extending the application period for the Special Concessionary Measures under the SME Financing Guarantee Scheme, injecting money into the SME Export Marketing and Development Funds, expanding the Funds’ scope, and providing profits tax rebates. Taken in total, these policies will help the development and competitiveness of SMEs.

The BPA supports the Government to provide more resources to the Hong Kong Tourism Board (HKTB) and Invest Hong Kong (InvestHK) to step up overseas publicity campaigns, which are important to improving our international image and restoring investor confidence in Hong Kong.
Promote Startups

The BPA also welcomes concrete measures by the Government to increase support for innovation and technology by encouraging more research and development activities, which include, among others, the $50 million Corporate Venture Fund set up by the Hong Kong Science and Technology Parks Corporation (HKSTPC) for co-investment purposes and the injection of $5 billion into the Innovation and Technology Fund.

Dr Lo Wai-kwok, BPA Vice Chairman, said the BPA regrets that the proposal to create an Innovation and Technology Bureau had been voted down. He hoped that the issue would be dealt with in a pragmatic and rational manner when the motion was resubmitted next month to the Legislative Council for consideration. He urged legislators to refrain from filibustering so that the proposal could be approved as quickly as possible.

The BPA welcomes the Government’s proposal to set up a pilot fund of $100 million to promote the development of financial technology in Hong Kong. Other than enhancing the public’s understanding of the financial services, the aforementioned measures are also useful in expanding career prospects for those interested in entering the industry. Mr Christopher Cheung Wah-fung, BPA Vice Chairman, stressed that, “To provide meaningful assistance to the financial services sector, priority should be given to the training of local professionals supplemented by the recruitment of overseas talent as needed.” He applauded the Financial Secretary for adopting the BPA’s suggestion for the Government and the financial services sector to cooperate in staging road shows on the Shanghai-Hong Kong Stock Connect arrangement as a means of deepening Mainland investors’ understanding of the Hong Kong stock market.

Seize the opportunity of “One Belt One Road”

The Budget also includes reference to the “One Belt One Road” initiative, which has attracted widespread support from local Governments across China. Mr Jeffrey Lam Kin-fung, BPA Vice Chairman, said we should seize this opportunity by incorporating the “One Belt One Road” strategy into Hong Kong’s vision on economic development and then to parlay this into a stronger and deeply grounded economy for the SAR. The “Belt and Road” initiative is also expected to increase opportunities for professionals in the business, industrial, engineering and financial sectors. The BPA urges the Government to work closely with business and industrial professionals to explore effective ways to participate in and capitalise on this strategic initiative.

Creation of a Future Fund

The Financial Secretary has proposed the establishment of a Future Fund comprising a $220 billion endowment from the Land Fund and a proportion of future budget surpluses. The Future Fund is intended as a reserve to underpin sustainable economic development in Hong Kong and to ensure that we can afford important projects regardless of the Government’s fiscal standing.

Mr Jeffrey Lam added that, as an open economic system, Hong Kong is highly vulnerable to external factors. In addition to the issue of an aging population, the Government should prepare for any possible future downturns through such means as controlling expenditure, creating stable income streams, and setting aside surpluses. As regards the Government’s policies to stabilise the property market (otherwise referred to as the “spicy” measures), Mr Jeffrey Lam said, “Too much spice is bad for health. The only solution to the housing problem is an adequate supply of land.”

Social harmony is only possible through cohesion. The BPA hopes that disagreements can be set aside and arguments will come to a halt so that the Government can focus on allocating resources and providing relief as appropriate to drive economic and social development, which are integral to the livelihood and happiness of people in Hong Kong for the New Year.