Fun challenge has captured the imagination, but also increased awareness of disease and raised a cool HK$530,000 for a support group

On the surface, the Ice Bucket Challenge appears to be just another social-media-induced craze. Yet the global campaign has helped shine a light on people suffering from a rare and incurable degenerative illness that affects about 300 people in Hong Kong.

Between Monday and Thursday, participants in the campaign raised about HK$530,000 for the Hong Kong Neuro-Muscular Disease Association by having buckets of ice poured over their heads. The donations added up to about five times the amount the society usually receives annually. It has yet to decide how to allocate the money, but plans to use it to help patients rent equipment and hire caretakers.

One person who would welcome the assistance is a housewife whose husband suffers from the condition.

Unable to move, her husband lost the ability to speak and communicate last year, and needs 24-hour care from his wife, their two children and a helper.

“The children are so unhappy and they ask: why does this have to happen?” she said. “They want to play with him and talk to him, but they can’t.”

His illness affects the family not just emotionally, but also creates a huge financial burden.

Saw Sow Jaintana, a social worker with the association, said patients needed services and equipment costing about HK$20,000 a month. These included machinery to help them breathe, medical supplies and 24-hour intensive care.

“The helpers who take care of them have to physically move them, and may develop muscle aches,” she said.

Because the illness is so rare, there is no government-funded programme specifically for ALS, although patients can get money from two schemes under the Social Welfare Department’s Community Care Fund. This offers up to HK$2,500 to rent breathing equipment and HK$2,000 for medical supplies.

The ALS patient’s wife said the government should also provide funding for helpers.

The Ice Bucket Challenge – which started in the United States – requires people to pour a bucket of ice water over their head and donate money to ALS patients before nominating three others to do the same. The “frozen” sensation of icy water is meant to parallel the state of immobility ALS patients endure.

Yesterday, Tourism Board chairman and tycoon Peter Lam Kin-ngok took on the challenge after being nominated by Secretary for Commerce and Economic Development Greg So Kam-leung. Lam was joined by legislators Andrew Leung Kwan-yuen and Jeffrey Lam Kin-fung.

“To have the chance to experience ALS victims’ pain and help them is a really good thing,” Leung said. 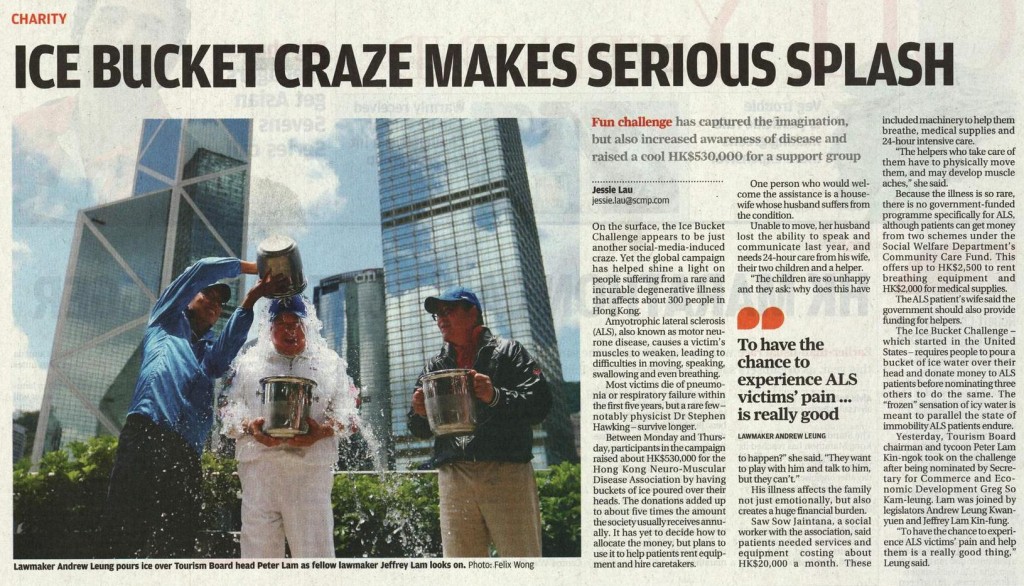