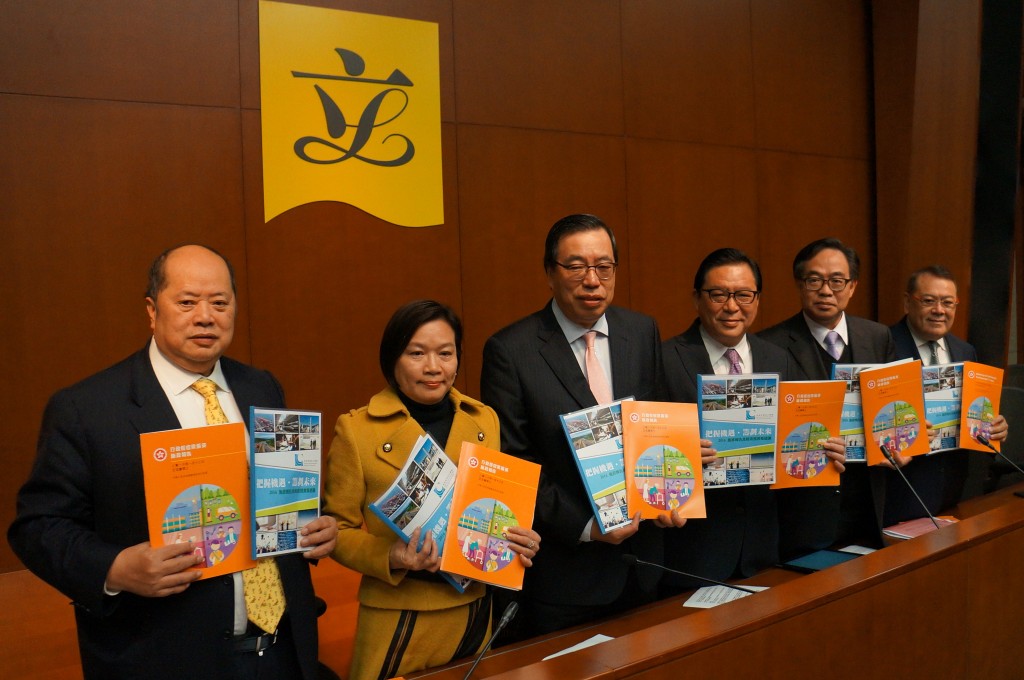 The BPA is pleased that Policy Address has adopted many of its suggestions on improving the economy and enhancing people’s livelihood.

The Business and Professionals Alliance for Hong Kong (BPA) was pleased that the Policy Address had adopted most of our suggestions, in particular those regarding the Belt and Road Initiative and the development of Hong Kong as a Smart City.

He believed that the national strategy of Belt and Road would provide the engine to drive Hong Kong’s economic growth over the longer term. However, he was also mindful of the challenging economic conditions Hong Kong would face over the next two years. It was therefore important that the Government introduce more short- to medium-term measures to stimulate the local economy and provide support to small and medium enterprises (SMEs). The BPA looked forward to next month’s Budget on substantive measures to address the hopes and aspirations of the general public.

Mr Andrew Leung pointed out that as the Belt and Road Initiative would serve as the development master plan for China over the coming decades, Hong Kong should capitalise on the opportunities arising from the national strategy by nurturing talents and introducing appropriate policies. The BPA was therefore pleased to note that the Government had adopted one of its core suggestions on setting up a Belt and Road Steering Committee, which would be chaired by the Chief Executive. The Steering Committee would be tasked with formulating strategies and policies to facilitate Hong Kong’s participation in the national development strategy, and liaise with government departments and organizations on the Mainland to improve communication and pool resources.

It was also gratifying to note that the Government was commited to developing Hong Kong into a platform for finance, trading, mediation and professional services, as well as a staging post for educational and cultural exchange under the aegis of the Belt and Road Initiative. This undertaking mirrored the BPA’s proposal, which was aimed at promoting development opportunities for Hong Kong.

Mr Andrew Leung hoped that other than attracting students from countries along the Belt and Road to study in Hong Kong, the Government would consider adopting the BPA’s proposal to establish a Belt and Road Internship Fund for Hong Kong students enrolled in internship or exchange programmes in Belt and Road countries to cultivate a larger pool of talent.

The BPA welcomed the Policy Address’ recommendation to take forward plans for the design of a Smart City, a notion that had been put forward earlier by the BPA in its proposals to the Government. Dr Lo Wai-kwok, BPA Vice Chairman, however stressed the need to improve the coverage and speed of free Wi-Fi services as quickly as possible to better reflect Hong Kong’s status as an international city. The objective of doubling the number of hotspots and network speed within three years as suggested in the Policy Address would, on the other hand, be too slow.

Although the allocation of approximately $5 billion to foster the development of innovation and technology was welcomed, Dr Lo Wai-kwok called on the Government to increase its spending on scientific research as a share of GDP from the existing 0.7% to 2.5% within a decade so that this particular activity could achieve industry status in its own right. To that end, he has urged the Government to provide triple tax reduction for corporate expenditure on scientific research to encourage private sector investments in this area. He was hopeful of good news when the Budget was unveiled next month.

In addition, he said that the engineering sector was supportive of the proposed “Hong Kong 2030+” to examine and update the city’s spatial planning framework and broad directions for planning and land and infrastructure development over the longer term.

Mr Jeffrey Lam Kin-fung, BPA Vice Chairman, said the BPA welcomed the Government’s suggestions on increasing both public and private housing supply, as well as its proposed flat production targets. However, it was recognized that resistance would be inevitable in connection with such issues as land rezoning and labour importation due to the prevailing political atmosphere. He hoped that political parties and interest groups would act according to the public’s best interests and refrain from objecting for the sake of doing so. Both the middle-class and grass-roots would lose out should the housing issue continue to drag on without an effective solution.

He added that the BPA had lobbied the Government repeatedly to rezone 3% of Hong Kong’s green belt for residential use especially in providing 270,000 affordable flats for middle-class and young families. He hoped the Government would give the suggestion its serious consideration.

Mr Lam said the BPA supported the Policy Address’s suggestion to host further mega events, which would be helpful in attracting tourists and alleviating a sluggish tourism industry. He hoped that the forthcoming Budget would include concrete measures to provide relief for the tourism sector. He also called on the Government to formulate and implement long-term strategies to sustain the industry.

Mr Christopher Cheung Wah-fung, BPA Vice Chairman, applauded the Government’s decision to allocate more resources to support FSDC, as well as in earmarking $100 million to implement a three-year pilot scheme for enhancing manpower training in the insurance and asset & wealth management sectors. He urged the Government and the Securities and Futures Commission to look into streamlining SFC Type 9 licensing application procedures so that brokers could begin practicing as soon as possible.

Mr Abraham Shek Lai-him, BPA Secretary General, noted that the Chief Executive had acknowledged the need for foreign labour last year. However, this year’s Policy Address did not address the issue of chronic manpower shortage that continued to plague the construction industry. He hoped that a proper labour importation scheme would be implemented to resolve escalating construction costs and project delays.

Dr Priscilla Leung Mei-fun, BPA LegCo member, pointed out that the Government’s announcement of a detailed schedule for implementing free half-day kindergarten education represented a major breakthrough. She was also pleased to note that the Policy Address had incorporated her proposal on improving water quality in the Victoria Harbour and to promote a water-friendly culture.