In response to a public consultation on Future Fuel Mix for Electricity Generation that is currently underway and to address public concerns on the foregoing, the Business and Professionals Alliance for Hong Kong (BPA) today (June 9) held a seminar on “Future Energy Solutions for Hong Kong”. 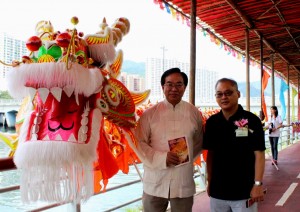 An Early Celebration of Dragon Boat Festival with the Elderly

Chinese traditional wisdom tells us that one should not store away winter clothing until after the Dragon Boat Festival. Although it was already late May, changes in weather and temperature were sometimes quite extreme. Today (24 May), Dr WK Lo Wai-Kwok, BPA Vice Chairman, and Ms Lo Wai-lan, BPA Kwai Tsing District Council Member, paid

The Business and Professionals Alliance for Hong Kong (BPA) organised a special activity to pay tribute to mothers on Mother’s Day (11 May) and made available a total of 8,000 carnations to BPA District Councilors and community officers for further distribution on the street.

BPA urges eligible members of the public to register as voters

Under the 2014 Voter Registration Campaign, which is now underway, eligible persons who have yet to register as electors are required to sign up on or before May 16 if their registration particulars are to be included in the final register, which will be released at the end of July later this year.

Representatives from the Business and Professionals Alliance for Hong Kong (BPA) today (2 May) met with Mrs. Carrie Lam, Chief Secretary for Administration, to exchange views and present written comments on the government’s Consultation Document on Methods for selecting the Chief Executive in 2017 and for forming the Legislative Council in 2016 .

The Business and Professionals Alliance (BPA) expanded its presence and reach to Kowloon with the official opening of an office in Sham Shui Po today (March 29). The BPA’s other offices currently include the Hong Kong Island headquarters, New Territories East Branch and New Territories West Branch. Dr Ko Wing-man, Secretary for Food and Health, Mr Wong Kam-sing, Secretary for the Environment, Mr He Jing, Kowloon Director of the Liaison Office of the Central People’s Government in the HKSAR, Mr Edward Yau Tang-wah, Director of the Chief Executive’s Office, and other guests attended a roast pig carving ceremony to celebrate the opening ceremony.